DSI is honored to have been selected as a 2016 Columbus Business First Outstanding Diverse Organization. We are proud to be recognized with such a talented pool of leaders and organizations in promoting diversity and inclusion in the workforce and the greater Central Ohio Community. Please join us on August 17th as we celebrate this award. 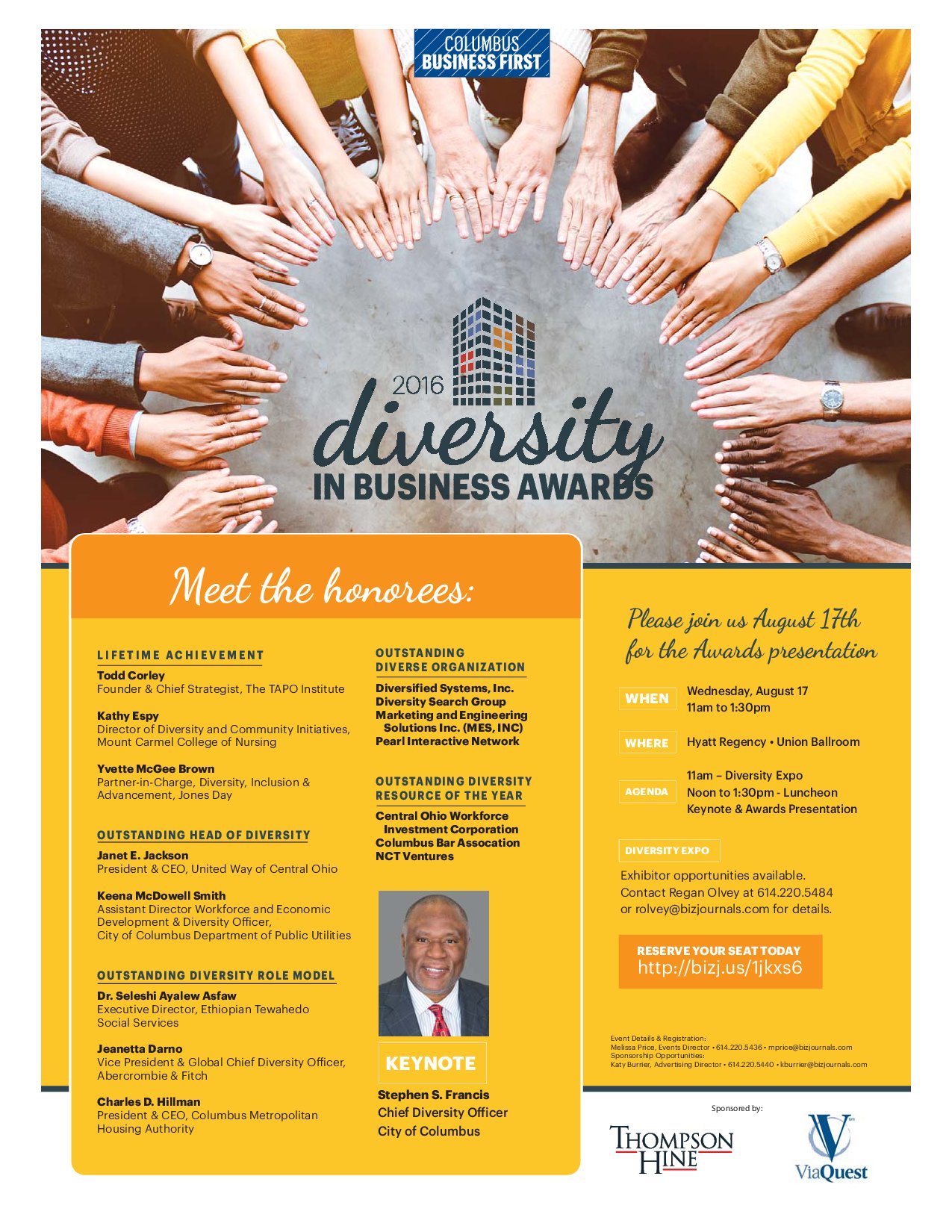 The Awards Ceremony will take place September 23, 2021, where Williamson will be formally recognized.

Congratulations to the DSI team on being selected as Ohio Minority Supplier Development Council’s 2017 Legacy Business of the Year. This is the second time DSI has been honored with this award, and the team is proud of its continued partnership and membership with the OMSDC.

Congratulations to Archie Williamson on recently being honored with Columbus Business First’s Diversity in Business Award as an Individual, after DSI was honored as an Outstanding Diverse Business in 2016. This award recognizes Williamson’s commitments and achievements to diversity in business and the workplace, as well as all of the efforts he has made to advance issues of diversity and inclusion within the Central Ohio region at large.

Diversified Systems, Inc. President and Chief Executive Officer, Archie D. Williamson, Jr., was named as the 2015 Executive of the Year by Columbus Business First BizTech, as published in the December 18, 2015 issue of Columbus Business First. This award recognizes one executive within the community for demonstrated leadership in the areas of technology and innovation in their organization, industry, and the Central Ohio community.

“I am humbled by this recognition, and I know that it is only possible thanks to the incredible Diversified Systems team—a dedicated group of professionals who work hard every day to drive innovation and provide the best possible service to our clients,” explained Williamson. “It’s an exciting time of growth and opportunity for DSI, and it’s a privilege to lead this organization.”

DSI was founded by Williamson to fill a niche for small companies requiring technological support to improve and streamline business operations. The company provides management and information systems consulting services for Fortune 1000 businesses as well as numerous federal and state government agencies.

Diversified Systems’ CEO, Archie Williamson, recently participated in a roundtable hosted by Columbus Business First to talk about innovation in workforce development. As Chairman of the Workforce Development Board of Central Ohio, Inc., Williamson is deeply familiar with the challenges in aligning education, workforce, and economic development to improve the region. Check out his thoughts on how Central Ohio can continue to grow and thrive.

This website uses cookies to improve your experience while you navigate through the website. Out of these, the cookies that are categorized as necessary are stored on your browser as they are essential for the working of basic functionalities of the website. We also use third-party cookies that help us analyze and understand how you use this website. These cookies will be stored in your browser only with your consent. You also have the option to opt-out of these cookies. But opting out of some of these cookies may affect your browsing experience.
Necessary Always Enabled
Necessary cookies are absolutely essential for the website to function properly. These cookies ensure basic functionalities and security features of the website, anonymously.
Functional
Functional cookies help to perform certain functionalities like sharing the content of the website on social media platforms, collect feedbacks, and other third-party features.
Performance
Performance cookies are used to understand and analyze the key performance indexes of the website which helps in delivering a better user experience for the visitors.
Analytics
Analytical cookies are used to understand how visitors interact with the website. These cookies help provide information on metrics the number of visitors, bounce rate, traffic source, etc.
Advertisement
Advertisement cookies are used to provide visitors with relevant ads and marketing campaigns. These cookies track visitors across websites and collect information to provide customized ads.
Others
Other uncategorized cookies are those that are being analyzed and have not been classified into a category as yet.
SAVE & ACCEPT